Alternative sights of Cologne: 3 reasons to visit Rudolfplatz in 2020 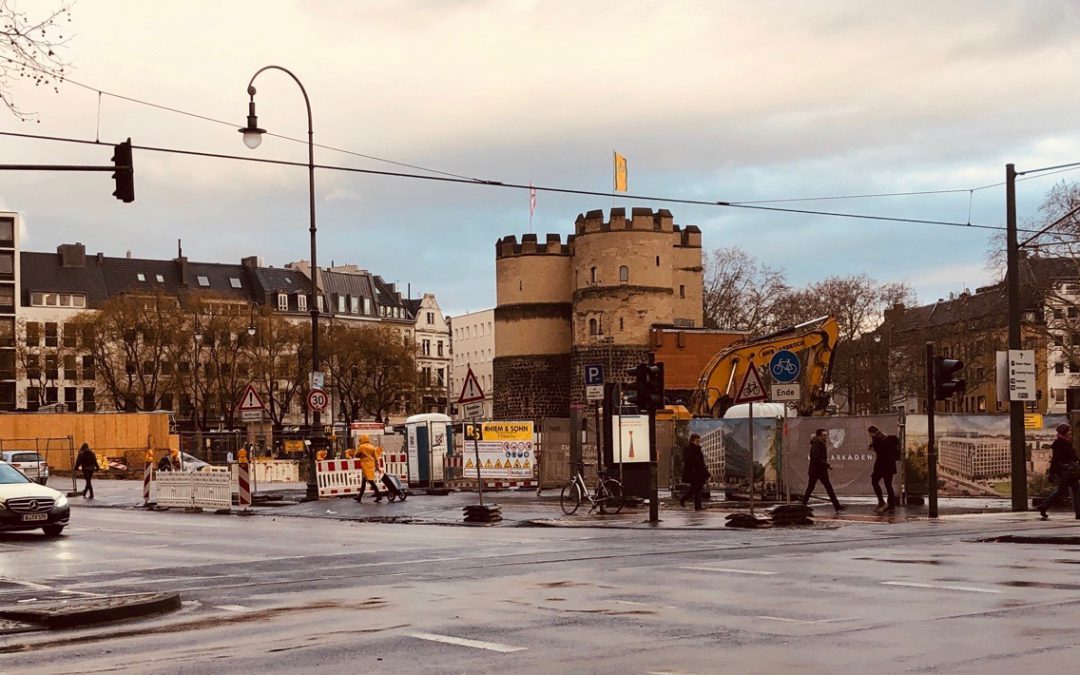 Any local would tell you that there is more to do in Cologne than visit its cathedral, old town, and chocolate museum (nice though they are). Here at Art of Touring we love showing people the alternative sights of Cologne. We can’t think of anywhere better to start one of our alternative guided tours than Rudolfplatz.

Read on to discover why Rudolfplatz is worth a look!

Reason 1: You can walk through the Hahnentor

In the middle ages, Rudolfplatz was the most important entrance through the city’s 12th century walls. It lies directly between Aachen, where Emperors of the Holy Roman Empire were crowned, and Cologne Cathedral. The cathedral was the most important religious site in the Empire, housing the relics of the three Magi. In fact, they are still there!

Following rapacious urban expansion in the 19th century, much of the city’s walls were torn down. They were seen as an old-fashioned hangover from a more primitive time. Only three of the wall’s twelve gates remain intact, of which the Hahnentor is one.

You’re struck, walking through the gate, by the fact that this very same structure has been used for centuries. And today Rudolfplatz is still a major artery of the city. Thousands pass by every day on trams, bicycles and by car.

Reason 2: You can see where a new Cologne is emerging

Cologne planners have not always respected the city’s historical buildings but nowadays protection is a much higher priority. Rudolfplatz now sits at the centre of one of the city’s main construction projects. In the place of rather tired mid-20th century buildings, work is underway to construct a new, smart-looking development directly opposite the historic city gate. It will contain opportunities for work, leisure, eating and drinking.

You can see how it will look when finished on the Max Dudler website.

At the same time, the transport thoroughfare either side of the site is under review as part of a revitalisation of the so-called “East-West Axis”. Up for discussion is a project costing up to €1bn to bury one of the busiest tram lines in Cologne. This would allow people to travel more easily across the city. Whether the city should pursue this project, or rather leave the tram lines at ground level, has been a hot topic. Interminable debates and public surveys came to a head at a council meeting in December 2018, at which an answer was expected. And the conclusion delivered to the waiting press was: “let’s plan both options and decide later”. A typical Cologne compromise offering flexibility at any price!

And it’s not just the commuters of Cologne who are affected by the changes to Rudolfplatz. For the last thirty years one of Cologne’s historic carnival societies, the Ehrengarde, called the Hahnentorburg home. The redevelopment of the area has meant the loss of their function room. As a result, an architect has come up with a tailor-made scheme to create function rooms on the same site. But this time they will be constructed underground. It’s a nice idea but the costs are thought to be prohibitive. What’s more, experience has shown in this city that such projects can quickly spiral out of control.

Reason 3: You can visit fantastic markets, especially at Christmas

Market lovers can get their fill of food, antiques and Christmas at Rudolfplatz.

Secondly, the food. There are the organic food markets (Ökomarkt) throughout the year on Wednesdays 11.00am to 6.00pm and Saturdays 8.00am to 2.00pm. In addition, every Thursday evening 4.00pm – 9.00pm there is a fantastic range of food stalls available under the “meet and eat” brand.

And finally, if you visit from 23 November to 23 December 2020, there are two Christmas Markets here – the classic “Nikolausdorf” market, offering classic Christmas market products, together with Cologne’s only LGBT Christmas Market, Heavenue. This is one of Cologne’s alternative sights in itself and is often missed. It is a sparkling and multi-colored addition to the city’s Christmas market offer.

Want to find out more about the alternative sights of Cologne?

We will be excited to show our guests around Rudolfplatz as part of our off-the-beaten track tours held through the summer. For more information, leave a comment or get in touch.