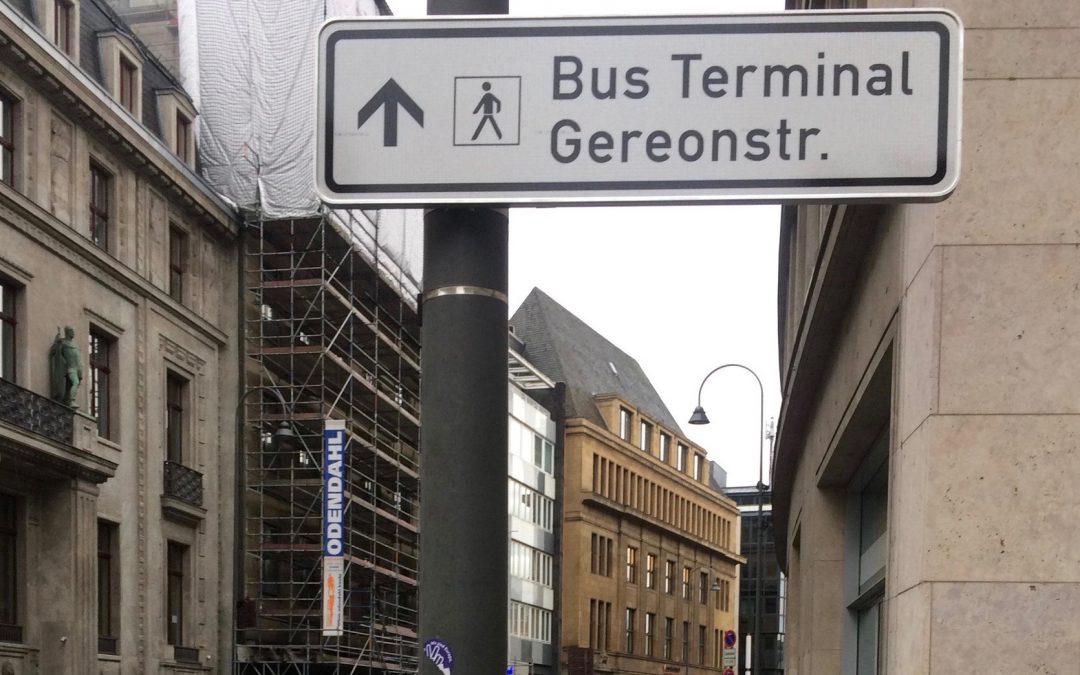 Arriving as a tourist by coach or bus in Cologne

Cologne is a tourist magnet with several million visitors expected in 2020. This number brings with it many challenges. For example, the city has to deal with over 18,000 tourist buses per year arriving in the city centre. These buses come either directly from abroad or are acting as transfers for guests from cruise ships moored on the Rhine (with many of them joining a guided tour organized by Art of Touring). This means the tourist bus stop in Cologne is always very busy.

Confusingly, Flixbus services stop outside Cologne. See the bottom of this post.

The city has taken two steps to tackle its tourist bus problem. Firstly: ban the buses from parking right next to Cologne Cathedral (on Komoedienstrasse). Secondly: move the tourist bus stop in Cologne further out to where there is more space.

The new stop, from January 2020, is on Gereonstraße (Gereon Street) near Boersenplatz. It lies between the IHK offices (Industrie- und Handelskammer zu Köln) and St Gereon Church.

Drivers and tour managers must be aware that buses can only wait at the stop for a maximum of 15 minutes.

If drivers want to wait somewhere for longer than 15 minutes, they have to go to the main “Buspark Köln”. This is located near the Mülheimer Bridge in a district to the north of the city centre known as Riehl, on a road called Kuhweg.

Drivers then need to time their arrival at the pick-up point on Gereonstrasse carefully, considering Cologne’s infamous traffic.

Walking between the Cathedral and the new tourist bus stop

Click here to open the map in Google Maps

The route isn’t an obvious one if you are a new visitor to the city. The city council has put signs up to mark the route between the Cathedral and the bus stop. However, they are not that obvious!

For groups arriving by bus, we will be starting our walking tours through the old town of Cologne and of Cologne Cathedral from the bus stop on Gereonstrasse.

This means we have prepared a new route for our walking tours, introducing our visitors to the city in a novel way. Cologne, with its rich history and culture, always has an interesting story at every corner, even those on the way to the bus!

For example, the new starting point opens up new sights at the beginning of our tour:

An important note: Flixbus buses stop elsewhere, not in the city centre!

Confusingly, this stop is not where the Flixbus service leaves from or arrives to. Long-distance buses are, controversially, still completely banned from Cologne city centre.

Travelers are then expected to make their own way into the city by taxi or public transportation.

This is the information Flixbus provides

For more information about the tourist bus stop in Cologne

The city council has published some guidance for bus drivers or feel free to ask us a question.